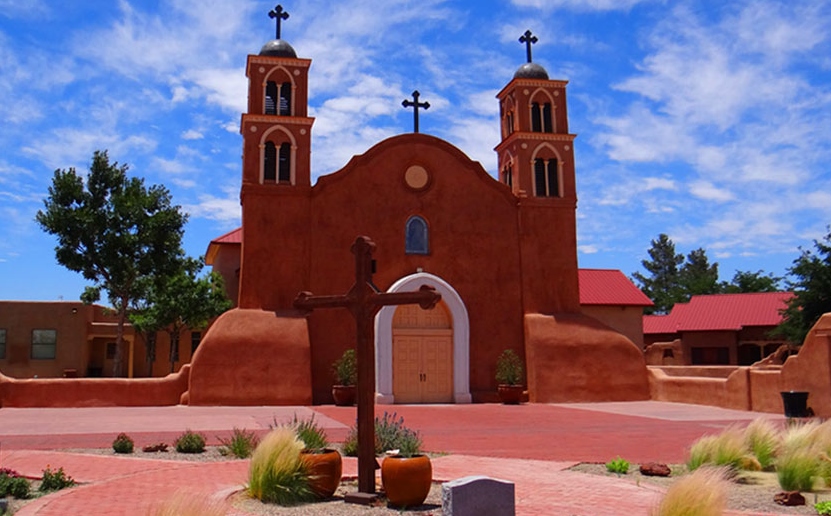 In 1598, the Piro Indians offered assistance to the colonists of the Don Juan de Oñate expedition as they traveled through the area. In his documents, Oñate attributedthe name, “Socorro” (help) to the pueblo for their kindness and generous gifts of corn and supplies. The Pilabo Pueblo was later named,“Nuestra Señora de Perpetuo Socorro” (Our Lady of Perpetual Help).

It is believed that the mission was built between 1615 and 1626. The massive adobe walls are about five feet thick. The vigas (beams) were hand carved in wood that had been hauled down from the mountains miles away from Socorro. Part of the foundation from the original church building can be viewed through a floor window inside the church.

During the Pueblo uprising of 1680, the Piros and Spanish fled south. It wasn’t until 1816, that a small group of Spaniards resettled Socorro and rebuilt the church.

There are an estimated 100-200 people buried under the church. Tradition tells us that General Manuel Armijo, the last governor of the Territory of New Mexico, is among those buried.

Some descendants of the early settlers say that in the early 1800’s, an Apache Indian raid was halted when they saw a man with wings and shining sword hovering over the church door. Shortly afterward, a petition was made to the Bishop to change the name of the church to San Miguel (St. Michael), the Angelic Protector of the people.

The most current restoration of the church was in the years 2010 through 2014. The 400th Year-long Anniversary of faith for San Miguel was celebrated from the re-dedication of the newly restored church on September 26, 2014 until September 27, 2015.

The church is one of the oldest Catholic churches in the nation.