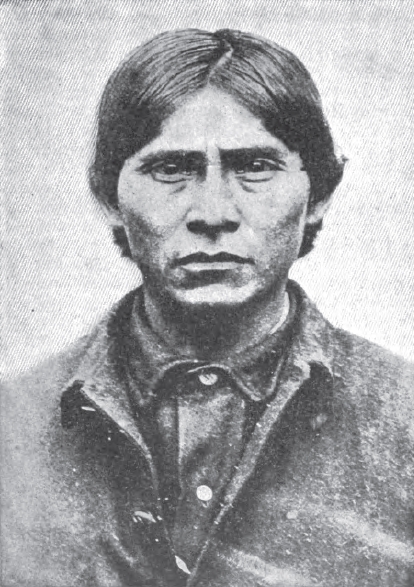 The Apache Kid
By Wikipedia

Haskay-bay-nay-ntayl (c. 1860 – after 1894), better known as the “Apache Kid”, was a White Mountain Apache scout, and later a renegade, active in the American states of Arizona and New Mexico, and the Mexican states of Sonora and Chihuahua in the late 19th and possibly the early 20th centuries.
His exact date of birth is unknown, but is believed to have been sometime in the 1860s. His year of death is generally given as 1894, but some New Mexico cattle ranchers had him living until the 1930s. The Apache Kid Wilderness in New Mexico was named after him. The Apache Kid character in Marvel Comics was also named after him but otherwise has no connection.

Early History
Haskay-bay-nay-ntayl was captured by Yuma Indians as a boy, and after being freed by the U.S. Army, he became a street orphan in army camps. As a teenager, in the mid-1870s, the Kid met and essentially became adopted by Al Sieber, the Chief of the Army Scouts. A few years later, in 1881, the Kid enlisted with the US Cavalry as a scout, in a program designed by General George Crook to help quell Apache raids. By July 1882, owing to his remarkable abilities in the job, he was promoted to sergeant. Shortly thereafter he accompanied General Crook on an expedition into the Sierra Madre Occidental. He worked on assignment both in Arizona and Mexico over the next couple of years, but in 1885 he was involved in a riot while intoxicated, and to prevent his being hanged by Mexican authorities, Sieber sent him back north.

Arrests and Trials
In May 1887, Sieber and several army officers left the San Carlos post on business, and the Kid was left in charge of the scouts in their absence. The scouts decided to have a party, and brewed up what was called tiswin, a type of liquor. During the drinking, several became intoxicated, and an altercation between a scout named Gon-Zizzie and the Kid’s father, Togo-de-Chuz resulted in the Kid’s father being killed. In turn, friends of the Kid killed Gon-Zizzie. The Kid also killed Gon-Zizzie’s brother, Rip. On June 1, 1887, Lt. John Pierce and Al Sieber confronted the scouts involved in the altercations, and ordered them to disarm and comply with arrest, until the incidents could be handled properly through investigation. The Kid and the others complied, but a shot was fired from a crowd that had gathered to watch the events. Several other shots were fired from the crowd, including one that hit Sieber in the ankle. During the confusion, the Apache Kid and several others fled.

The army reacted swiftly, sending two troops of the 4th Cavalry in pursuit of the escapees. The Kid and his followers evaded the soldiers, while relying on assistance from sympathetic Apaches. The Kid contacted the army and stated that if the soldiers were recalled, he would surrender. They were, and he did, on June 25, 1887. He and four others were court martialed, found guilty of mutiny and desertion, and sentenced to death by firing squad. In August, this was commuted to life in prison. General Miles intervened, and further reduced the sentence to ten years in prison.

The five were sent to Alcatraz, where they remained until their convictions were overturned in October, 1888. They were freed, but in October, 1889, enraged Apaches in the area were able to force the issue of new warrants, and again the Kid was on the run. Again they were arrested, and again they were convicted, this time sentenced to seven years in prison, and transported to Yuma Territorial Prison. Shortly afterward, the five escaped by overpowering three guards, Glen Reynolds, Eugene Middleton, and W. A. Holmes. Reynolds was killed, with his pistol and watch stolen in the process, and Holmes too was killed; Middleton was badly hurt, but stated later that he would have been killed had the Kid not intervened and prevented his death.

Last Years
A fierce snowstorm prevented any pursuit of the escapees. For years there were unconfirmed reports of sightings, but nothing ever came of any of them. Over the next several years, the Apache Kid was accused or linked to various crimes, including rape and murder, but there were never any solid links to him being involved in these or any crimes at all. For all practical purposes, he vanished.

During an 1890 shootout between Apache renegades and Mexican soldiers, a warrior was killed and found to be in the possession of Reynolds’ watch and pistol. However, the warrior was said to have been much too old to be the Apache Kid. The last reported crimes allegedly committed by the Kid were in 1894. It was in that year in the San Mateo Mountains west of Socorro, New Mexico that Charles Anderson, a rancher, and his cowboys killed an Apache who had been rustling cattle and who was identified at the time as the Apache Kid. That identification is also contested. After that, he became more of a legend than anything else. In 1899, Colonel Emilio Kosterlitzky, of the Mexican Rurales, reported that the Kid was alive and well and living among the Apache in the Sierra Madre Occidental. This was never confirmed.

In his book, “Cow Dust and Saddle Leather” by Ben Kemp (1968) {Library of Congress Catalog Card Number 67-24617, University of Oklahoma Press.} relates in detail his knowledge of the last days of the Apache Kid. Chapter 17 is entitled “The Apache Kid’s Last Horse Wrangle”. In it the author describes the scene he witnesses as a 17-year-old. In that chapter he describes how Billy Keene, a member of the posse, actually had the head of the Apache Kid in Chloride, New Mexico in the year 1907.

The chapter describes how, starting September 4, 1907, the posse split up and tracked down the Apache Kid in the San Mateo Mountains. The author describes in detail events related by Billy Keene. He also relates how the watch actually belonged to a rancher names Saunders. The rancher Saunders was found dead and another man, Red Mills, was actually being held in connection with his murder. The gold-filled Elgin watch had been sent to a jeweler to be repaired. The jeweler who repaired it had written down the serial number and inscribed one of his own in the back of the case. The Apache Kid had been known to be in the area of the Saunders ranch at the time of his demise.

In addition, the book reports that an Apache woman was wounded in the shoot out. The book continues to describe the events of her search for food. She was eventually captured at the Monica Tanks cabin fifty miles south of San Marcial. When questioned she confirmed that her husband was the Apache Kid and he had been killed at the head of the San Mateo Canyon. She was returned to the Mescalero Apache tribe. The tribe was informed of the situation and her two children were taken into the tribe.

Edgar Rice Burroughs, future creator of the Tarzan tales, was a member of the 7th U.S. Cavalry while they were “chasing” the Apache Kid in 1896 Arizona.
Cattle ranchers continued to report rustling well into the 1920s, often claiming it was the Apache Kid in the lead, but those also were never confirmed, and authorities eventually simply discounted any involvement by the Kid, long thought dead by either gunshot or sickness, as those rumors had filtered down also.
Today, one mile from “Apache Kid Peak”, high in the San Mateo Mountains of the Cibola National Forest, a marker stands as a grave, where the Anderson posse claimed to have killed the Kid in 1894. According to local residents the body was not buried and the bones and shreds of his clothing lay scattered about the site for some years, with people taking some as souvenirs.

The actor Kenneth Alton played the Apache Kid in a 1955 episode of the syndicated television series Stories of the Century, starring and narrated by Jim Davis.