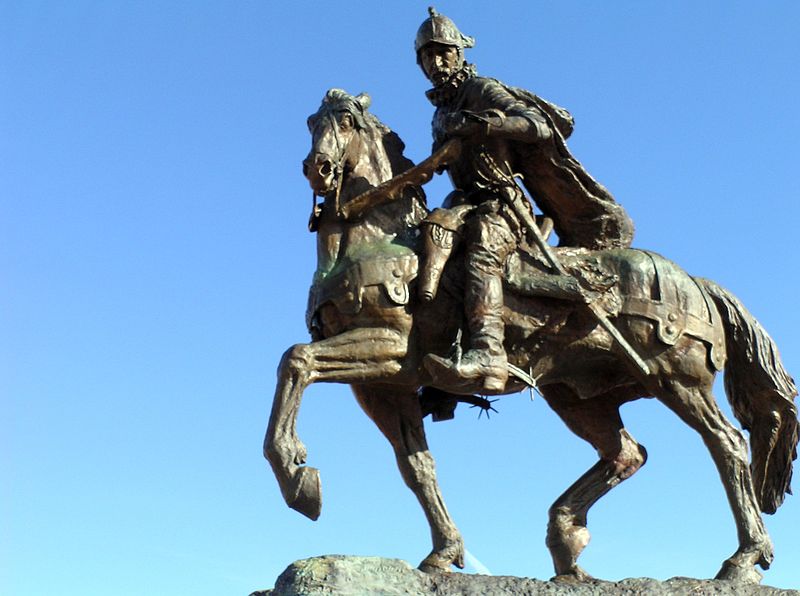 In June 1598, Juan de Oñate led a group of Spanish settlers through the Jornada del Muerto, an inhospitable patch of desert that ends just south of the present-day city of Socorro. As the Spaniards emerged from the desert, Piro Indians of the pueblo of Teypana gave the Spaniards food and water. Therefore, the Spaniards renamed this pueblo Socorro, which means “help” or “aid”. Later, the name “Socorro” would be applied to the nearby Piro pueblo of Pilabó.

A LITTLE MORE ABOUT JUAN DE OÑATE FROM WIKIPEDIA:

Early Years
Oñate was born in the New Spain (colonial México) city of Zacatecas to Spanish-Basque colonists and silver mine owners. His father was the conquistador—silver baron Cristóbal de Oñate, and his mother Doña Catalina Salazar y de la Cadena. His ancestor Cadena fought in the Battle of Las Navas de Tolosa in Al Andalus, and was the first to break the line of defense protecting Mohammad Ben Yacub. The family was granted a coat of arms, and thereafter were known as the Cadenas.

New Mexico Expedition
In 1595 he was ordered by King Philip II to colonize the northern frontier of the Viceroyalty of New Spain. His stated objective was to spread Roman Catholicism by establishing new missions in Nuevo México. He began the expedition in 1598, fording the Rio Grande (Río del Norte) near present day El Paso in late April.
On April 30, 1598, he claimed all of the territory across the river crossing to the north for the Spanish Empire.

That summer his party continued up the middle Rio Grande Valley to present day northern New Mexico, where he encamped among the Pueblo Indians. He founded the Province of Santa Fe de Nuevo México, and was its first colonial governor. Gaspar Pérez de Villagrá, a captain of the expedition, chronicled Oñate’s conquest of New Mexico’s indigenous peoples in his epic Historia de la Nueva México in 1610.

Acoma Massacre
Oñate soon gained a reputation as a stern ruler of both the Spanish colonists and the indigenous people. In October 1598, a skirmish erupted when Oñate’s occupying Spanish military demanded supplies from the Acoma Pueblo people, demanding provisions that were essential for the Acoma to survive the oncoming winter. The Acoma resisted and 11 Spaniards were killed, amongst them Don Juan Oñate’s nephew. The battle began and in January 1599, Oñate retaliated for the loss of his nephew with the Acoma Massacre. His soldiers massacred 800 villagers, including men, women, and children.

They enslaved the remaining 500, and by Don Juan’s decree, they amputated the left foot of every Acoma man over the age of twenty-five. Females were sent off to be slaves for twenty years. Eighty men had one of their feet amputated, though some commentator put the figure of those mutilated at “only” twenty-four.

Great Plains Expedition
In 1601, Oñate undertook a large expedition east to the Great Plains region of central North America. There were 130 Spanish soldiers and twelve Franciscan priests, similar to the expedition of the Spanish conquest of the Aztec Empire, and a retinue of 130 Indian soldiers and servants, and 350 horses and mules. Oñate journeyed across the plains eastward from New Mexico in a renewed search for Quivira, fabled “city of gold.” As had the earlier Coronado Expedition in the 1540s, he encountered Apaches in the “Texas Panhandle” region. He proceeded eastward following the Canadian River into the “Oklahoma” region. Leaving the river behind in a sandy area where his ox carts could not pass, he went cross country, and the land became greener, with more water and groves of Black walnut (Juglans nigra) and Bur oak (Quercus macrocarpa) trees.

Escanjaque People
Jusepe probably led Oñate on the same route he had taken on the Umana and Leyba expedition six years earlier. They found an encampment of native people that Oñate called the Escanjaques. He estimated the population at more than 5,000 living in 600 houses. The Escanjaques lived in round houses as large as 90 feet (27 m) in diameter and covered with tanned buffalo hides. They were hunters, according to Oñate, depending upon the buffalo for their subsistence and planting no crops.
The Escanjaques told Oñate that a large settlement of their enemies, the Rayado Indians, was located only about twenty miles away in a region called Etzanoa. Thus, it seems possible that the Escanjaques had gathered together in large numbers either out of fear of the Rayados or to undertake a war against them. They attempted to enlist the assistance of the Spanish and their firearms, alleging that the Rayados were responsible for the deaths of Humana and Leyva a few years before.

The Escanjaques guided Oñate to a large river a few miles away and he became the first European to describe the tallgrass prairie. He spoke of fertile land, much better than that through which he had previously passed, and pastures “so good that in many places the grass was high enough to conceal a horse.” He tasted and found of good flavor a fruit that sounds like the Pawpaw.

Rayados Peoples
Near the river, Oñate, the Spaniards, and their numerous Escanjaque guides saw three or four hundred Rayados on a hill. The Rayados advanced, throwing dirt into the air as a sign that they were ready for war. Oñate quickly indicated that he did not wish to fight and made peace with this group of Rayados, who proved to be friendly and generous. Oñate liked the Rayados more than he did the Escanjaques. They were “united, peaceful, and settled.” They showed deference to their chief, named Caratax, whom Oñate detained as a guide and hostage, although “treating him well.”

Caratax led Oñate and the Escanjaques across the river to a settlement on the eastern bank, one or two miles from the river. The settlement was deserted, the inhabitants having fled. It contained “about twelve hundred houses, all established along the bank of another good-sized river which flowed into the large one [the Arkansas]…. the settlement of the Rayados seemed typical of those seen by Coronado in Quivira sixty years before. The homesteads were dispersed; the houses round, thatched with grass, large enough to sleep ten persons each, and surrounded by large granaries to store the corn, beans, and squash they grew in their fields.” With difficulty Oñate restrained the Escanjaques from looting the town and sent them home.

The next day Oñate expedition proceeded onward for another eight miles through heavily populated territory, although without seeing many Rayados. At this point, the Spaniard’s courage deserted them. There were obviously many Rayados nearby and the Spaniards were warned that the Rayados were assembling an army. Discretion seemed the better part of valor. Oñate estimated that three hundred Spanish soldiers would be needed to confront the Rayados, and he turned his soldiers around to return to New Mexico.

Return to Nuevo México
Oñate had worried about the Rayados hurting or attacking him, but it was instead the Escanjaques who attacked him as he was beginning his return to New Mexico. Oñate described a pitched battle with one thousand five hundred Escanjaques—probably an exaggeration—in which many Spaniards were wounded and many natives killed. After more than two hours of fighting, Oñate retired from the battlefield. The Rayado chief, Caratax, was freed by a raid on the Spanish and Oñate freed several women captives, but he retained several boys at the request of the Spanish priests so that they could be instructed in the Catholic faith. The cause of the attack may have been Oñate’s kidnapping of women and children. Oñate and his men returned to New Mexico, arriving there on November 24, 1601 without any further incidents of importance.

Contemporary Studies
The path of Oñate’s expedition and the identity of the Escanjaques and the Rayados are much debated. Most authorities believe his route led down the Canadian River from Texas to Oklahoma, cross-country to the Salt Fork, where he found the Escanjaque encampment, and then to the Arkansas River and its tributary, the Walnut River at Arkansas City, Kansas where the Rayado settlement was located. A minority view would be that the Escanjaque encampment was on the Ninnescah River and the Rayado village was on the site of present day Wichita, Kansas. Archaeological evidence favors the Walnut River site.

Authorities have speculated that the Escanjaques were Apache, Tonkawa, Jumano, Quapaw, Kaw, or other tribes. Most likely they were Caddoan and spoke a Wichita dialect. We can be virtually certain that the Rayados were Caddoan Wichitas. Their grass houses, dispersed mode of settlement, a chief named Catarax, a Wichita title, the description of their granaries, and their location all are in accord with Coronado’s earlier description of the Quivirans. However, they were probably not the same people Coronado had met. Coronado found Quivira 120 miles north of Oñate’s Rayados . The Rayados spoke of large settlements called Tancoa—perhaps the real name of Quivira—in that area to the north. Thus, the Rayados were related culturally and linguistically to the Quivirans but not in the same political entity. The Wichita at this time were not unified, but rather a large number of related tribes scattered over most of Kansasand Oklahoma. That the Rayados and Escanjaques may have spoken the same language, but were nevertheless enemies is not implausible. Oñate’s 1605 “signature grafitti” on Inscription Rock, in El Morro National Monument.

Colorado River Expedition
Oñate’s last major expedition went to the west, from New Mexico to the lower valley of the Colorado River. The party of about three dozen men set out from the Rio Grande valley in October 1604. They traveled by way of Zuñi, the Hopi pueblos, and the Bill Williams River to the Colorado River, and descended that river to its mouth in the Gulf of California in January 1605, before returning along the same route to New Mexico. The evident purpose of the expedition was to locate a port by which New Mexico could be supplied, as an alternative to the laborious overland route from New Spain.

The expedition to the lower Colorado River was important as the only recorded European incursion into that region between the expeditions of Hernando de Alarcón andMelchior Díaz in 1540, and the visits of Eusebio Francisco Kino beginning in 1701. The explorers did not see evidence of prehistoric Lake Cahuilla, which must have arisen shortly afterwards in the Salton Sink.

They mistakenly thought that the Gulf of California continued indefinitely to the northwest, giving rise to a belief that was common in the 17th century that the western coasts of an Island of California were what was seen by sailing expeditions in the Pacific.

Native Peoples
Native groups observed living on the lower Colorado River, were, from north to south, the Amacava (Mohave), Bahacecha, Osera (Pima), at the confluence of the Gila Riverwith the Colorado, in a location later occupied by the Quechan, Alebdoma.

Seen by Oñate below the Gila junction but subsequently reported upstream from there, in the area where Oñate had encountered the, Coguana, or Kahwans, Agalle, and Agalecquamaya, or Halyikwamai, and the Cocopah.

Concerning areas that the explorers had not observed directly, they gave fantastic reports about races of human monsters and areas said to be rich in gold, silver, and pearls.

Later Life
In 1606, Oñate was recalled to Mexico City for a hearing into his conduct. After finishing plans for the founding of the town of Santa Fé, he resigned his post and was tried and convicted of cruelty to both natives and colonists. He was banished from Nuevo México, but on appeal was cleared of all charges.

Eventually Oñate went to Spain, where the king appointed him head of all mining inspectors in Spain. He died in Spain in 1626. He is sometimes referred to as “the Last Conquistador.”